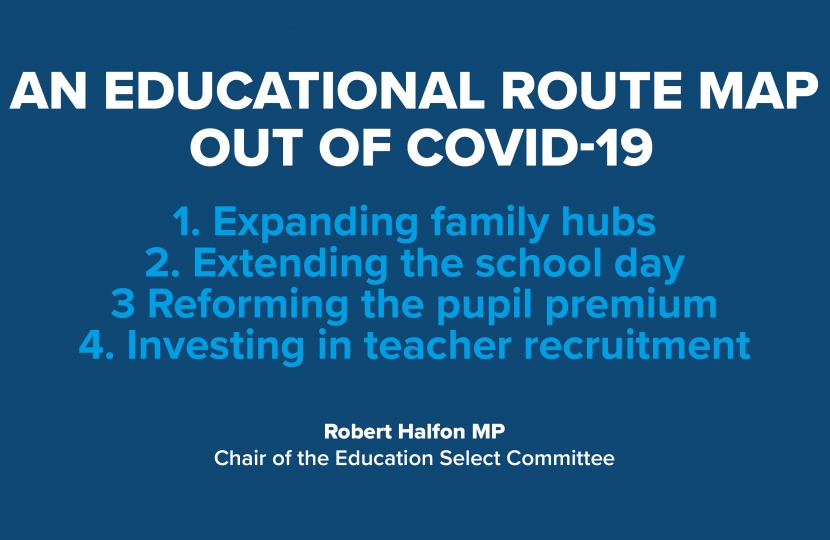 More than any other event in my time, Covid-19 has laid bare the damning truth about our educational divide.

It has exposed how many children lack basic digital access – standard fare these days for a shot at a decent future, as the world marches headlong into the fourth industrial revolution.

But it has also exposed far, far more.

For all the laptops in the world, they will only work if children use them.

And, as they spent more time cocooned at home, we learned about the other ills that damaged their learning – laptop or no laptop.

Plenty did their best to study in unsuitable work environments, sharing the dinner table with mum, dad and other family – all trying to keep their heads above water.

Others grappled with their mental wellbeing, increasingly eroded by the rigid tedium of the same recycled days. According to the NHS, one in six children aged 5-16 had a probable mental disorder as of July 2020. In 2017, that figure was one in nine.

Some discarded their learning altogether.

In the worst cases, children spent their time in conditions no child should ever endure – physical danger and emotional distress.

‘Generation Covid’ now faces a torrid barrage of lost learning and a new frontier of vulnerabilities.

Particularly for disadvantaged pupils. Already, they were 18 months behind their peers by the time they took GCSEs. Now, school closures could reverse the progress made in closing the gap since 2011.

So how can we support them as we emerge from lockdown?

The Government is to be commended for its pursuit of higher standards.

frameworks. And we have some of the best universities in the world.

However, progress has ground to a screeching halt - and that was before the pandemic (between

A rigorous curriculum and traditional methods of behaviour management alone can only get us so far. They are not going to deal with the complex challenges that exist in some children’s lives.

There are no Houdini acts when it comes to escaping the worst ravages of educational failure.

So what is required is thinking outside-the-box.

To make real headway, it will be essential to address why some groups underperform.

and for pupils with a statement or ECH plan, it was 13.7.

40% of the disadvantage gap at age 16 has already emerged by the time children start primary school.

We can be radical without a revolution.

Nearly 93% of parents’ felt their parenting abilities and behaviours improved; and over 94% of mothers’ felt their emotional wellbeing increased.

Some hubs are linked to schools with remarkable results. Like Reach Academy Feltham, where

almost half of children are eligible for pupil premium – and yet in 2019, 66.1% of its pupils achieved

a Grade 5 or above in English and maths (national average was 43.2%), and the Attainment 8 score

The Government championed family hubs in its manifesto. But it has set aside £2.5 million for further research. Yet again, DfE money is going to think tanks, which could be spent on frontline services.

Ministers need to get on and deliver.

We must also ensure all children receive health visits. Around 20% of children are not even receiving the five visits offered.

They are priceless touch-points.

Manchester has set the bar here. Using its devolved powers, children aged 0 to 5 are visited eight times. Practitioners look out for a range of early alarm bells, including slow speech and language development.

Second, we need answers for those children already at school – whose prospects now look grim unless significant remedial action is taken.

The Government rightly established the National Tutoring Programme – something I campaigned for strongly.

Upon their return to school, every pupil must be urgently assessed as to the extent of lost learning and how much catch-up is needed.

And the Government should be prepared to extend small group tutoring, if that’s what it takes.

But catch-up is not just about algebra and Shakespeare.

One in three primary school aged pupils are overweight or obese. And children’s mental health has become dangerously fragile.

In 2017, DCMS found that underachieving young people who participated in extra-curricular sports increased their numeracy skills by 29% above those who did not.

And there is opportunity to bring down youth crime. Half of under-16 knife crime takes place between 4-6pm.

All this could be supported by local community groups, education charities, other schools and universities.

If we are really serious about tackling the unfurling mental health crisis, practitioners should be stationed in every school, available online and in person.

Third, better use can be made of existing schemes to help with catch-up.

The current formula is far too clunky.

Schools get funding for any pupil who has been eligible for free school meals at any point in the last six years.

Instead, let’s refocus the premium so it is more heavily weighted towards the long-term disadvantaged.

And Opportunity Areas, too, need a serious rethink.

Some £96 million is spent on them - though their impact is far from conclusive.

This money would be better spent on boosting teaching quality in our most disadvantaged areas, achieved by incentivising highly commended initial teacher training providers to work with disadvantaged schools.

And teaching bursaries, retention payments and salary bonuses to good teachers in challenging areas could be introduced, to avoid flight of local talent.

Anne has been a champion for children and families across the country.

Anne is unusual because in contrast to many other semi-Government positions, whether they are heads of regulatory bodies or Commissioners, she doesn’t just play one side off the other, or wait to see which way the wind is blowing, or just keep her head down. Anne challenges all of us, shakes us all about.

For those who watch our Education Committee, they’ll know our job is to scrutinise and make sure people are accountable and yet when Anne came, she got a round of applause from all members of all parties. And I think that says it all.

And if I say one last thing, every family in the country would be comforted knowing that Anne was on their side.

I hope that as we move forward, we will continue her work to address social injustice in education and provide a real ladder of opportunity for every child, whatever their background or disadvantage, in the ways I have highlighted:

And investing in teacher recruitment.