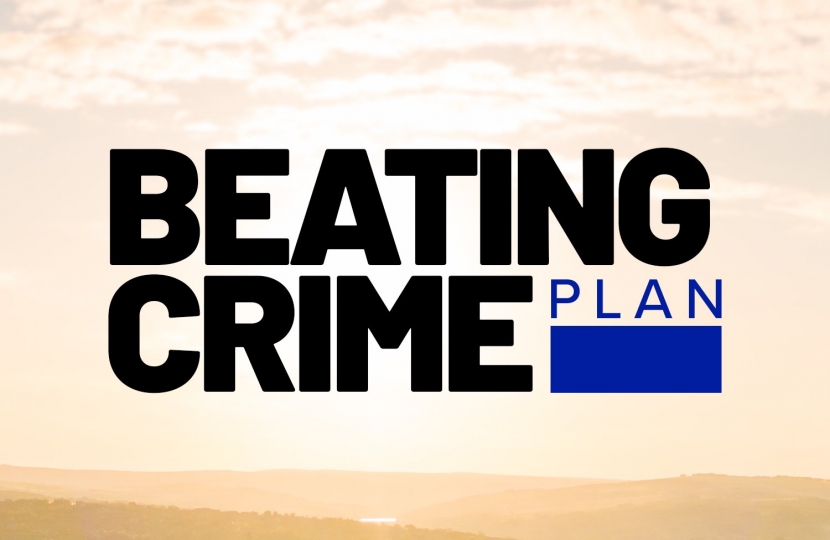 A new plan to reduce crime, protect victims and make the country safer has been announced by the Prime Minister and Home Secretary. Harlow’s MP, Robert Halfon, has long campaigned for more investment into the police and tougher sentencing and has strongly welcomed the new plan announced.

The plan builds on the commitment of toughening sentences to keep the most dangerous offenders behind bars and recruiting 20,000 more police officers nationally - 9,000 of which have already been recruited - including over 500 more in Essex.

The plan will ensure that Harlow residents are better protected, with each neighbourhood having contactable, named police officers, who know their area and are best placed to ensure that persistent crime and anti-social behaviour is tackled.

Harlow’s MP, Robert Halfon, has strongly welcomed the new measures announced: “I pledged to make Harlow’s streets safer and I have voted in Parliament for more money and powers for the police to tackle crime and anti-social behaviour, tougher sentencing for criminals and I’ve worked hard to ensure victims get the support they deserve.

“The Beating Crime Plan announced by the Prime Minister builds on the progress that has been made, but crucially goes much further. I believe that these measures will make our streets safer and ensure that neighbourhoods and victims have the support they need at every stage.

“I will continue to work hard in Parliament to ensure that Harlow benefits from all the measures and extra investment coming forwards to make our town a safer place to live.”

The Beating Crime Plan spans work across the police, courts, prison and probation service to drive down and prevent crime, improve confidence in the criminal justice system, rehabilitate offenders to ensure they do not go on to commit crimes again and create the safer streets and homes the public want for themselves and their neighbours.

A particular focus is given to early intervention, prevention and practical measures to deliver real results across communities, and to tackle serious violence and neighbourhood crimes.

Announcing the plan, the Prime Minister, Boris Johnson, said: "When I first stood on the steps of Downing Street as Prime Minister, I promised to back the police and make people safer, because we cannot level up the country when crime hits the poorest hardest and draws the most vulnerable into violence.
"That is why my government has remained unstinting in its efforts to protect the British public and this plan delivers a fresh commitment, as we emerge from the impacts of the pandemic, to have less crime, fewer victims and a safer society."

The Home Secretary, Priti Patel, added: "I am absolutely determined to cut crime and deliver a safer society for the public, and the Beating Crime Plan shows how the government is going to do just that.

"We’re putting 20,000 new police officers on the street, equipping them with new powers to catch criminals and take away knives, and shutting down drug gangs who exploit children and the vulnerable to make money.

"This plan sets out a clear path for a better future for the British public – one with less crime, fewer victims, and a safer society for all."