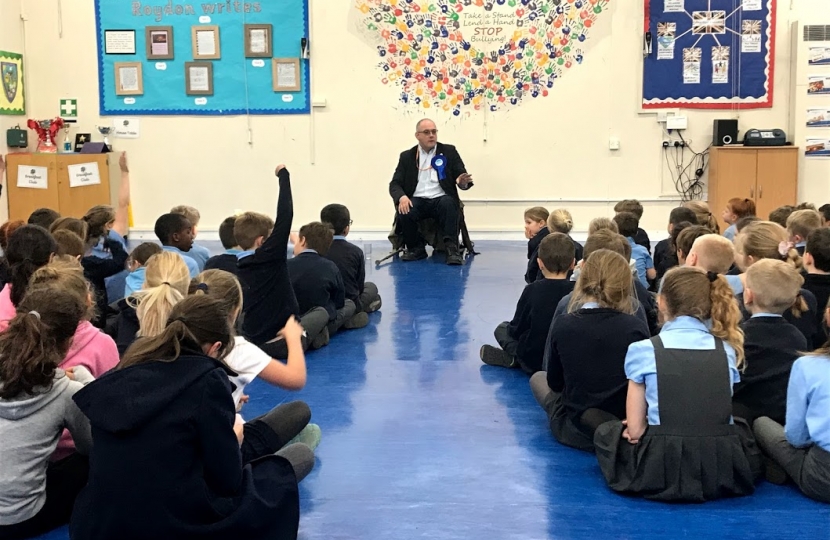 Last week, having previously advised that schools would remain open – that the risk to children was low, that classrooms were safe and that closures had a marginal effect on transmission – the Government decided to reach a consensus with the education unions and shut school doors. At the same time, the decision to go ahead with exams was scrapped and pupils will now, for the second year in a row, be under a system of centre-assessed grades.

As pointed out by Department for Education (DfE) Ministers on a call with MPs just two weeks ago, one of the most senior CMO officials said:

A statement on January 2 from the Royal College of Paediatricians and Child Health (RCPCH) noted:

“Children’s wards are usually busy in winter. As of now, we are not seeing significant pressure from Covid-19 in paediatrics across the UK. As cases in the community rise there will be a small increase in the number of children we see with Covid-19, but the overwhelming majority of children and young people have no symptoms or very mild illness only. The new variant appears to affect all ages and, as yet, we are not seeing any greater severity amongst children and young people.”

Conservative MPs were also told by the DfE about a recent study by Public Health England, which concluded that:

“School closures would have only a minor and temporary effect on transmission rates, and the wider impact of this on children’s social, physical, educational and emotional development would be significant.”

If the science has changed, and the new variant represents a serious threat to children, teachers and support staff, then the Chief Scientific Adviser and the Chief Medical Officer should, at the very least, set out the evidence explaining this, and why everything they had said about the need to keep schools open has now changed.

Whether or not a risk assessment was carried out as to the impact of school closures on pupils’ educational attainment, mental health and wellbeing is unknown. If it hasn’t, it should have been, and if it has, it should be published.

What we do know, according to a report by the IFS and Nuffield Foundation, is that education inequalities have been exacerbated by the pandemic, and the gap between disadvantaged pupils and their better-off peers has widened significantly. Since September, disadvantaged children have missed more school than others. They are also less likely to return to schooling, even when given the chance to do so. The IFS state that the pandemic will halt or reverse the closing of the attainment gap – undermining much of the work the Government has done since 2010.

The RCPCH and the Royal Society of Psychiatrists (RSoP) have also highlighted the damage to pupils’ mental health and well-being of school closures. A few months ago, 1,500 members of the RCPCH signed an open letter warning of the “scarring” harm to children’s life chances. Last week, Dr Karen Street, an Officer of the RSoP, wrote harrowingly about the 400 per cent increase in eating disorders amongst young people – partly due to social isolation. On Saturday, in The Daily Telegraph, Dr Bernadka Dubicka, Chair of the Royal College of Psychiatrists Child Faculty, reminded readers of the:

“NHS digital data published in October which found one in six five-to-16-year-olds living with a mental health problem, up from one in nine just three years ago.”

“Inequalities will widen, life chances will diminish, and the mental health crisis already running rife in our young people could plague this generation for years to come – that is unless the Government urgently prioritises children and young people and places them at the centre of policy making”

For our younger generation, it looks pretty bleak.

Of course, there is remote learning, but there are still hundreds of thousands of students on the wrong side of the digital divide. The Government is trying to address this, with one million laptops being provided and free mobile data, thanks to an agreement reached with phone operators. However, for all the laptops in the world, it still isn’t enough. We know that online learning can be extremely varied. Moreover, it requires a student to open the computer and to study independently or for parents to provide constant support. School closures put enormous pressures on parents, many of whom are balancing their own work commitments, while trying to help educate their children.

The Government has made its decision on schools and we are where we are. So what should happen now?

First, everything should be done to try and get schools open. If this means ensuring that teachers and support staff are a priority for vaccination (not because one group of workers are favoured over another – but to get pupils back into the classroom and learning again), then so be it. The end of half-term re-opening should be a reality, not just an aspiration.

Second, the DfE must rocket-boost the £1 billion catch-up tuition fund to focus it on disadvantaged areas so that extra assistance can be given to pupils at risk of being left-behind. Mental health support should be provided in schools so that children, parents and teachers who are struggling can access counselling and advice when they need it.

Above all, the Government needs to set out a long-term plan for education – focused on addressing the attainment chasm between the disadvantaged and the better-off and, perhaps, look at the role and effectiveness of the £2.5 billion pupil premium, for starters.

Children, parents, teachers and support staff need an educational route map out of the Covid-19 swamp. Without it, many could be stuck in the mire of an epidemic of educational poverty and a crisis of mental health, long after the pandemic has passed. The levelling-up ladder of opportunity for the coming generation, will have been knocked away.