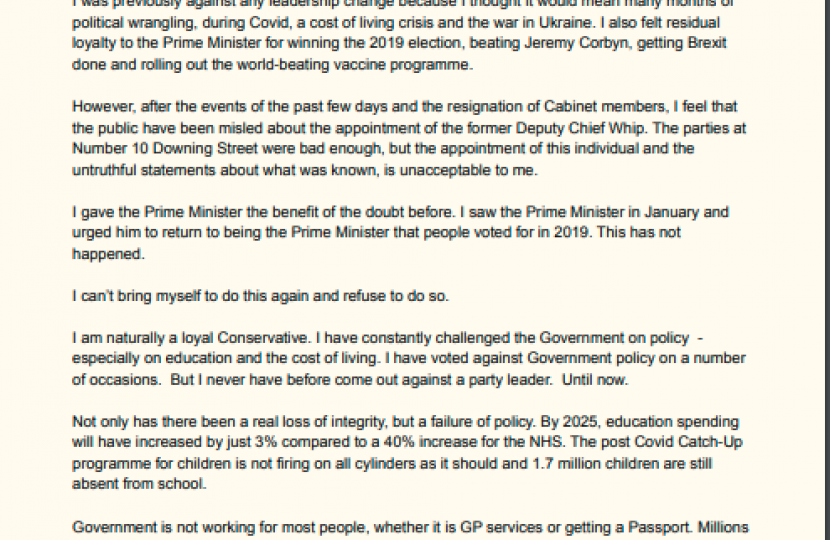 In my last Statement to Your Harlow on 26th May, 2022, I said that, “if governance does not improve, I will have reached the end of the road”.

I was previously against any leadership change because I thought it would mean many months of political wrangling, during Covid, a cost of living crisis and the war in Ukraine. I also felt residual loyalty to the Prime Minister for winning the 2019 election, beating Jeremy Corbyn, getting Brexit done and rolling out the world-beating vaccine programme.

However, after the events of the past few days and the resignation of Cabinet members, I feel that the public have been misled about the appointment of the former Deputy Chief Whip. The parties at Number 10 Downing Street were bad enough, but the appointment of this individual and the untruthful statements about what was known, is unacceptable to me.

I can’t bring myself to do this again and refuse to do so.

I am naturally a loyal Conservative. I have constantly challenged the Government on policy  - especially on education and the cost of living. I have voted against Government policy on a number of occasions.  But I never have before come out against a party leader.  Until now.

Not only has there been a real loss of integrity, but a failure of policy. By 2025, education spending will have increased by just 3% compared to a 40% increase for the NHS. The post Covid Catch-Up programme for children is not firing on all cylinders as it should and 1.7 million children are still absent from school.

Government is not working for most people, whether it is GP services or getting a Passport. Millions are still struggling with the cost of living. Much policy delivery is a mirage. There is little trust in the Prime Minister.

For this reason, if there is a vote for a change in leadership, I will now vote for that change.