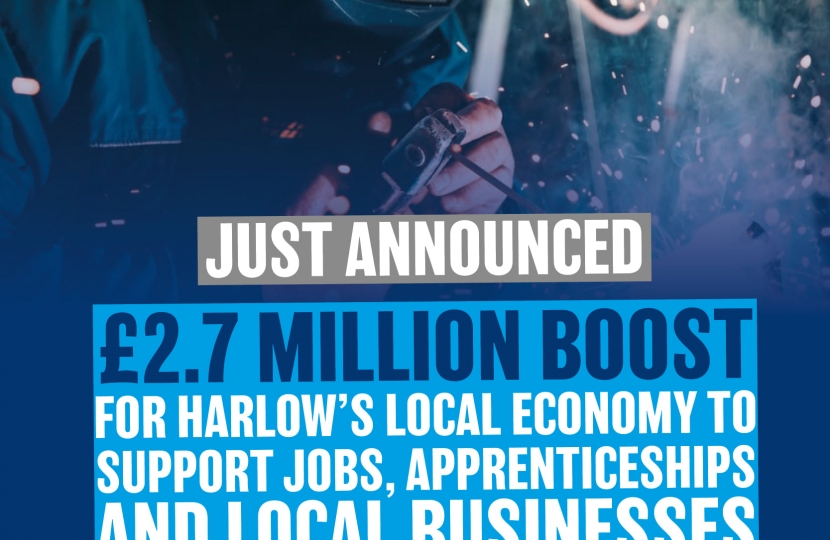 The Government has announced that it will be investing £2.7 million into Harlow’s local economy to support local businesses, jobs, apprenticeships and careers guidance.

The announcement has been strongly welcomed by both the Conservative Councillor, Dan Swords, who led the bid, and Harlow’s MP, who lobbied the Government in Parliament to approve the bid.

Cabinet Member for Regeneration at Harlow Council, Cllr Dan Swords, said: “Today is a fantastic day for Harlow's businesses and young people. We have secured a £2.7 million package of investment from the Government which will transform careers guidance, apprenticeships and job opportunities as well as massively improving skills and productivity in the local economy.

"We submitted this bid just a few days after being elected and I pay special tribute to the Council Officers who worked so hard on our submission. Our MP, Robert Halfon, has also lobbied the Government continuously to ensure our bid was approved.

"I passionately believe that investing in careers, skills, apprenticeships and our local businesses is one of the single most important investments that we can make for the future of our town.

"Building back better is not about these impressive figures, but about improving the life chances for our residents and opening high-quality job and apprenticeship opportunities across Harlow and that is what we are delivering."

Mr Halfon added: "Championing apprenticeships and skills has always been my passion in politics. The £2.7 million investment into Harlow announced today will help to transform our local economy with a huge boost for apprenticeships, jobs and local businesses.

"I would like to commend Cllr Dan Swords and the Council Officers who put together a fantastic bid and I am pleased to have lobbied the Government in Parliament to deliver the investment.

"We are working hard to build an even better Harlow and with the £23.7 million Towns Fund, our new hospital, junction 7a, the regeneration of the town centre, the Science Park, our Enterprise Zone and major investments into Harlow College, that is what we are delivering."