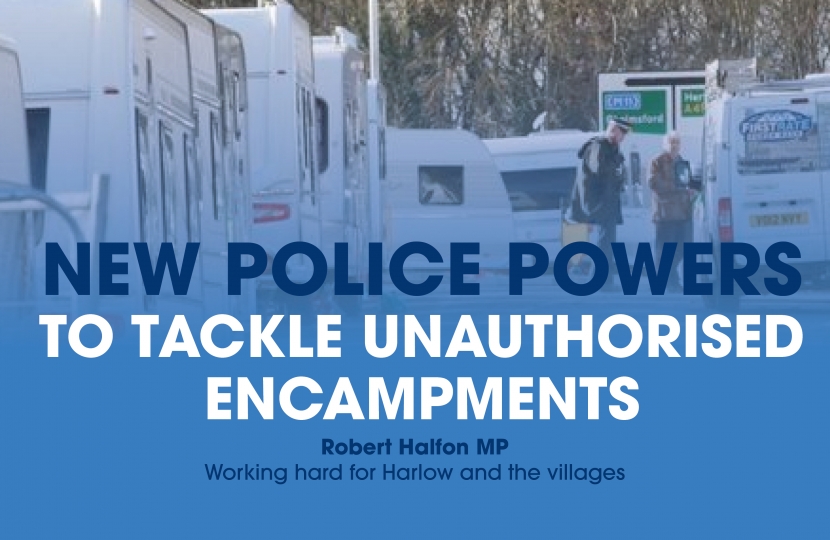 The Home Secretary, Priti Patel, has announced that the government will strengthen police powers and create a new criminal offence to tackle unauthorised encampments. The announcement follows years of campaigning from Harlow’s MP, Robert Halfon, who has strongly welcomed the news.

The new offence will target trespassers who intend to reside on any private or public land in vehicles without permission, and where they are causing significant disruption, distress or harm to local communities.

Police will be given powers to seize vehicles and arrest offenders. The measures will target harmful encampments which reflect badly on the wider community. Existing police powers are also being strengthened to direct trespassers to leave land.

Harlow’s MP, Robert Halfon, welcomed the announcement saying “I have worked hard in Parliament to ensure that the police have the powers they need to ensure Harlow is never again blighted by unauthorised encampments in the way we saw a few years ago.

“I led a parliamentary debate on the matter, have met numerous times with Ministers and the Police Commissioner for Essex and have raised this on many occasions in Parliament.

“Last Summer, Harlow Council did not renew the injunction to stop unauthorised encampments coming to the town, which makes these new powers even more important for our police.

“I will continue to work hard to ensure that our town never again faces the difficulties brought by unauthorised encampments again.”

Home Secretary, Priti Patel, said: “This new offence will enable the police to fine or arrest those residing without permission on private or public land in vehicles in order to stop significant disruption, distress or harm being caused to the law-abiding majority.

“I am delivering on my commitment to give the police the powers they need to tackle these encampments swiftly and effectively.”

A new plan to reduce crime, protect victims and make the country safer has been announced by the Prime Minister and Home Secretary. Harlow’s MP, Robert Halfon, has long campaigned for more investment into the police and tougher sentencing and has strongly welcomed the new plan announced.