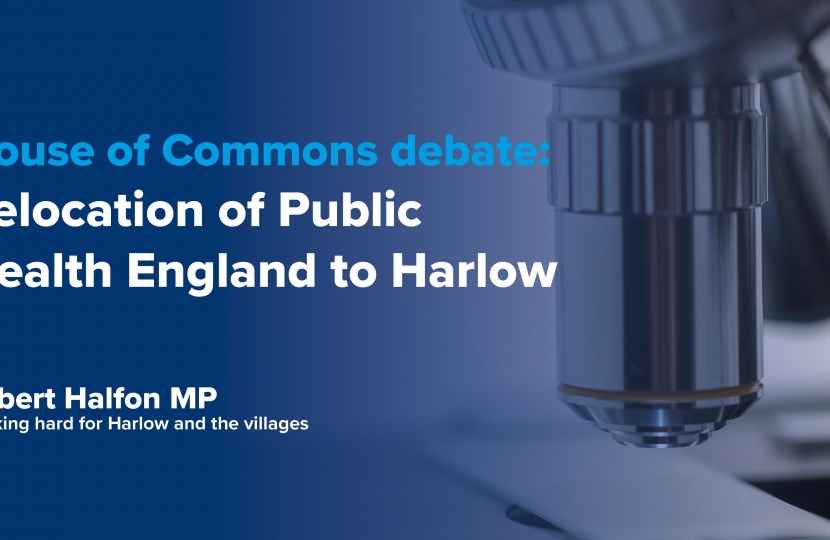 It is a huge honour to be doing this debate under your chairmanship today, Madam Deputy Speaker, and I thank Mr Speaker for granting this debate. Today I would like to update the House on the desperate need for the creation of a new state-of-the-art public health science campus that is fit for the 21st century. This debate is timely as we seek to recover from the devastating covid-19 pandemic that has plagued us for far too long.

In September 2015, the then Chancellor, George Osborne, announced that the Government would be investing £350 million to create world-leading public health laboratories in my constituency of Harlow, Essex. The original intention was for Public Health England’s headquarters and scientific functions to be relocated to our town. I pay special tribute to you, Madam Deputy Speaker, my hard-working constituency neighbour. You are not just a Deputy Speaker, but the right hon. Member for Epping Forest (Dame Eleanor Laing), and you have worked hard with me for a long time on supporting Public Health England. I give thanks to my hon. Friend the Member for Brentwood and Ongar (Alex Burghart), and to my hon. Friend the Member for Hertford and Stortford (Julie Marson), with whom I share a constituency office. She has done so much on this issue. I know she will be speaking tonight, and I strongly welcome her solid support, as I do yours, Madam Deputy Speaker, for the move of Public Health England’s successor body to Harlow.

I understand that Public Health England is being disbanded and that the organisation is due to be replaced by the newly formed UK Health Security Agency. I have been well assured that this new organisation will also require modernised laboratories. Previous problems have not turned to dust. The current facilities available at Porton Down and Colindale remain exhausted, burned out and ultimately no longer fit for purpose. Significant funding has already been committed to the Harlow site—I understand that the total amount of money spent on project thus far is approaching £250 million.

In a vote of confidence in response to my recent parliamentary question, the Minister explained that a further £120 million-worth of investment has been agreed for the period spanning 2021 to 2022 in Harlow. That shows a real commitment from the Government. I thank the Minister, the Department of Health and Social Care, and in particular the former Health Secretary, my right hon. Friend the Member for West Suffolk (Matt Hancock), for the continued support for the project and for my constituency of Harlow.

Not only has significant investment taken place, but the plan for the creation of a public health science campus in Harlow is now mature and shovel-ready. Considerable site demolition work has been completed. The buildings have now been stripped to their core and the drainage and power systems are beginning to be installed. Contracts are being drawn up and construction proper could start this year.

In this debate, I would like to outline three reasons why the campus remains necessary and why Harlow is still the best location for the Government’s investment. I am pleased to have met Health Ministers, the Chancellor and senior officials at Public Health England to discuss these matters over the past months. First, the need for updated facilities has become even more important given the current public health context. We must learn lessons from the covid-19 pandemic. We should be looking to the future and onwards to the horizon as we climb down from the coronavirus mountain. We cannot afford to be too cautious. Given that there will be ever-increasing public health spending, the Harlow plant provides excellent value for money. Furthermore, the Harlow project has been designed with the threat of a novel pandemic infection in mind, as has been emphasised on the Government’s own website, which states:

“Early learnings from COVID-19 clearly show the importance of an integrated public health response and the need for rapid sharing of data, information, new laboratory tests and other innovations, coordinated and led from centres like Harlow.”

Those learnings have strengthened the case for the campus, which will place Harlow as one part of the public health system for the development and application of a range of public health interventions. Those can then be adopted across the country.

The construction of a new campus with world-leading laboratory facilities will surely go a long way in improving our resilience and ensuring preparedness for future pandemics. The project will provide a reassuring message for us to give the nation while managing continued uncertainty and scrutiny. This hub could be a shining beacon of hope in the stormy sea from which we are emerging.

Secondly, Harlow’s location within the area covered by the UK Innovation Corridor makes it the ideal place for the creation of such a campus. The London-Stansted-Cambridge corridor is a driver for growth in data sciences as well as life sciences and that sets it off as a unique set of opportunities. Creating the campus in Harlow will mean that our nation’s core microbiology, epidemiology, genomics and data science capabilities will be close to major universities in Cambridge, Essex, Hertfordshire and north London, and the Wellcome Sanger Institute as well as leading life science multinational companies such as GlaxoSmithKline and AstraZeneca. The east of England could be set to become the public health science capital of the world. We could lead the way in research, science and technology.

The importance of the project was even referenced in the UK Innovation Corridor’s submission to the 2020 spending review. It stated:

“The creation of a new public health science campus represents an enormous recognition of the region as being at the forefront of UK science, research and innovation. It is integral to enabling the Innovation Corridor to fully realise its potential in positioning the UK as a scientific superpower.”

In addition, Harlow itself has a tradition of life science and public health investment. The proximity of the campus to the town’s enterprise zones and science park makes Harlow and the science hub the best location for business and research partnerships. The new Harlow hospital, expected by 2025, will also create greater opportunity for health science partnerships, skill sharing and research.

Thirdly, the project will bring significant benefits to the Harlow constituency and surrounding area and fit neatly with the Government’s commitment to level up disadvantaged areas. The Government should be looking to distribute research capacity widely across the UK, rather than concentrating investment in the big capital cities.

Harlow is the second most deprived town in Essex and has some of the most deprived neighbourhoods in the country. Even before the pandemic, jobs, growth and educational attainment had stalled. Much of this is rooted in a new town legacy of ageing infrastructure, poor housing stock and poor perceptions of place, by which I mean disused buildings, some levels of antisocial behaviour and low economic capital. The Government are committed to a levelling-up agenda. I have worked hard to ensure that the Harlow constituency has received great investment. Harlow has been given £81 million for the M11 junction 7a, hundreds of millions for our new Harlow hospital, major investment for our enterprise zone and science park, and most recently £23.7 million as a result of the towns fund bid.

Further to that, Harlow College, one of the finest further education colleges in England, is also bidding, with other colleges in Essex, for a new institute of technology. The bid comes on top of a £2.5 million upgrade of the college and the creation of a £12 million advanced manufacturing centre. Public Health England is also helping to provide skills for Harlow and the surrounding area with its construction hub, which was opened at Harlow College in October 2019. We have further exciting developments taking place, such as the Harlow and Gilston garden town project, which could bring thousands of new homes. It is reliant to an extent upon the creation of a new public health campus in Harlow, as that would bring jobs to sustain this new influx of people.

The creation of a new public health science campus in Harlow would be the golden thread that would tie all this investment together; it is the linchpin upon much else rests. The project represents an opportunity to drive forward Harlow’s growth strategy and address some of the socioeconomic challenges faced by our town and the surrounding areas. The impact that this project will have on Harlow is clear, as it has been estimated that it will create 2,900 gross permanents jobs and generate about £80 million a year across Essex, through employment, skills, STEM— science, technology, engineering and maths—local procurement and support for the local economy.

Madam Deputy Speaker, your place in the Chair tonight signifies your vote of confidence in and hard work for Public Health England. I welcome the Government’s investment in PHE and the vote of confidence of £120 million this year in the Harlow plan. Clearly, things will be different with the new UK Health Security Agency. However, for the reasons I have outlined, the Government could not have made a better decision than by investing in Harlow. First, the public health context and the need for new facilities makes this project ever more crucial. Secondly, Harlow’s location is second to none; our town is part of the innovation corridor and has a long history of life science investment. Thirdly, this project is an essential part of the Prime Minister’s levelling-up agenda and will transform our town by bringing jobs, skills, growth and opportunity.