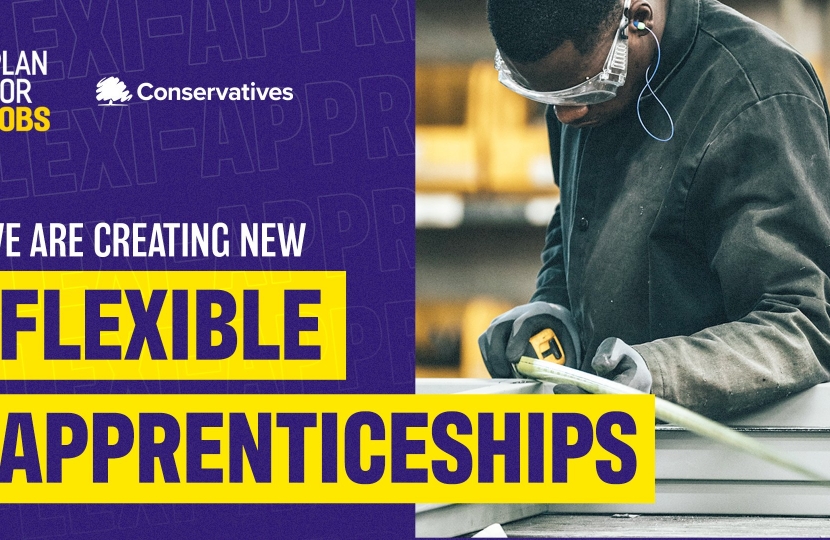 Harlow’s MP, Robert Halfon, has championed apprenticeships and skills since he was first elected in 2010. He was the first MP ever to employ an apprentice in his Parliamentary office, and has subsequently employed five more. He has campaigned tirelessly to “rocket-boost” apprenticeship opportunities, which he says allow our young people to “climb the educational ladder of opportunity”.

This week, the Government has announced a new £7 million investment to create new flexi-apprenticeships which will unlock apprenticeship opportunities in sectors with flexible employment patterns and short-term roles, such as digital, adult social care, transport and manufacturing which have historically found it challenging to benefit from the high-quality opportunities available.

For example, this would enable an apprentice working in film, TV or theatre to work on different productions during their apprenticeship, or an apprentice in construction to fulfil several contracts to complete their apprenticeship – such as working on a home refurbishment or a project for an office block. Meanwhile, someone working in adult social care could undertake care placements with a range of employers – including home care via a care agency, and in nursing home or hospice settings.

The announcement has been backed by another £7 million of funding, which Mr Halfon has worked hard to secure through dozens of Parliamentary questions, speeches, Education Committee reports and much more besides. The fund will establish a small number of agencies that will set up new flexi-job apprenticeships so an apprentice can work across a range of projects and with different employers to gain the knowledge, skills and behaviours they need to get job security and prosperity.

“I have worked hard in Parliament to secure massive investment into apprenticeships since I was first elected. I’m pleased that over the last ten years that has resulted in billions of pounds of Government backing coming forward to allow millions more young people to do an apprenticeship.

“This new announcement and funding will help to remedy that and alongside the Prime Minister’s Apprenticeship Guarantee and the £3,000 grant businesses receive to employ an apprentice, we are building an apprenticeship and skills nation.”