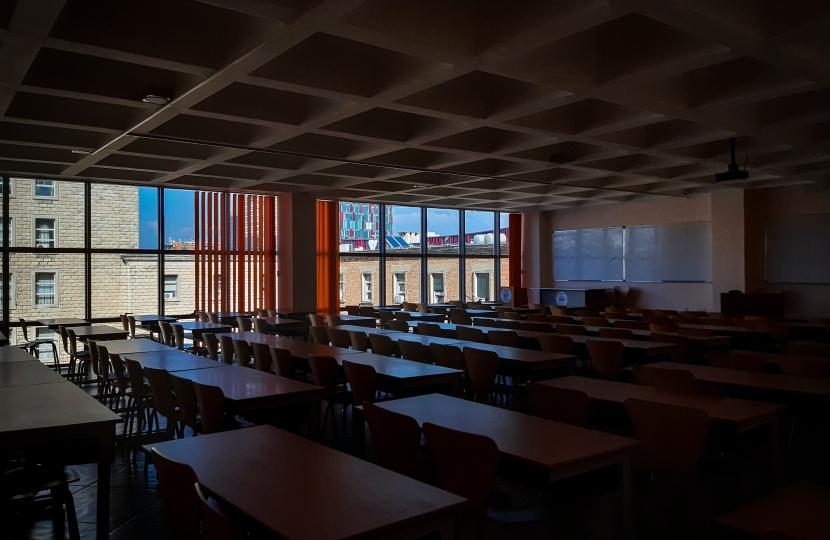 Halfon, MP for Harlow, will use his Bill to introduce a ‘triple lock’ of protections which would ensure that any future school shutdowns would have to be scrutinised, debated and approved by Parliament before being implemented or extended.

Since the outbreak of the Coronavirus pandemic, school closures have resulted in children losing around 58% of all classroom time. On average, pupils have missed 115 days of school and children in critical exam years were missing one out of every four days of their education.

As well as redefining schools as “essential infrastructure”, the further requirements of the triple lock would require the Government to:

Throughout the pandemic, Mr Halfon has been a consistently strong advocate of schools remaining open. Commenting on his Bill, he said:

“I’m not a lockdown sceptic but I am a school-down sceptic. Whilst national lockdowns were important to protect the health of the public, school closures have been nothing short of a disaster for our children. These closures wielded a hammer blow for students’ education and wellbeing. Their effect was apocalyptic, threatening the futures of millions of pupils and students and stopping them climbing the ladder of opportunity.

“Even before the pandemic, disadvantaged pupils were already 18 months’ of learning behind their better-off peers by the time they took their GCSEs. Now, as a result of school closures, these pupils face a widening attainment gap and a worsening mental health crisis, numerous safeguarding hazards and diminished life chances. Shockingly, it is estimated that school closures will cost our young people between £78 and £154 billion in lost earnings over the course of their lifetimes.

“This is why the triple lock in my Bill is so important. By ensuring that any decision taken to close schools is done so following the recommendation of the Children’s Commissioner, is agreed and voted on by a majority of Parliament, and is strictly time-limited, we can make sure the best interests of the child are considered at every stage to keep children in school. If we had prevented schools closing in the first place, these children would have remained in the classroom, learning and preparing themselves for the world of work. We owe it to our children to safeguard their educational futures that COVID-19 put on hold.”

“In the largest-ever survey of children ‘The Big Ask’ children told us how they like school and how much they missed it and their friends during the pandemic. After so much online learning, children in England – vulnerable children, especially – care passionately about being able to go to school again.

“There is no doubt that children paid a high price for their time away from school and now is the moment to put children at the heart of the recovery from the pandemic. That is why it is absolutely right for us to do all we can to keep schools open for children. A ‘triple lock’ would mean children’s needs were considered at every stage to keep children in school.

“There is nowhere better for children to be than in the classroom. Teachers and schools did amazing things to support children in the last year, but, the virtual environment is a shadow of the real thing. Now we must do everything we can to keep children in school and this Bill provides the opportunity to do just that.”

“Never again must schools have to compete with pubs, theme parks and Primark to open.

“Children suffered the worst disruption in their education since WWII during the pandemic and millions have been held back in their learning and suffered serious damage to their mental health as a result - especially the most disadvantaged children.

“We should be in no doubt that keeping children in educational settings is a priority so I support this Bill. Schools, colleges and universities should always be the last to close and the first to open in any emergency.”

“UsforThem recognise and applaud the ongoing work of Robert Halfon MP to ensure continuity of education for children throughout the pandemic, and wholeheartedly welcome this Bill.

“For many months now, UsforThem has been campaigning for children to return to, and stay in, school. School closures have caused huge harm to the education attainment, life chances, and mental and physical health of children and this Bill will ensure that the Department for Education’s stated intent for schools to “deliver face-to-face, high quality education to all pupils” becomes and stays a reality. It will give certainty to children and demonstrate commitment from policy makers that their education matters.”

MP for Harlow welcomes investment to protect the environment

Local MP, Robert Halfon, has responded to the announcement that fines against water companies will be reinvested to enhance our natural environment and to protect our waterways.