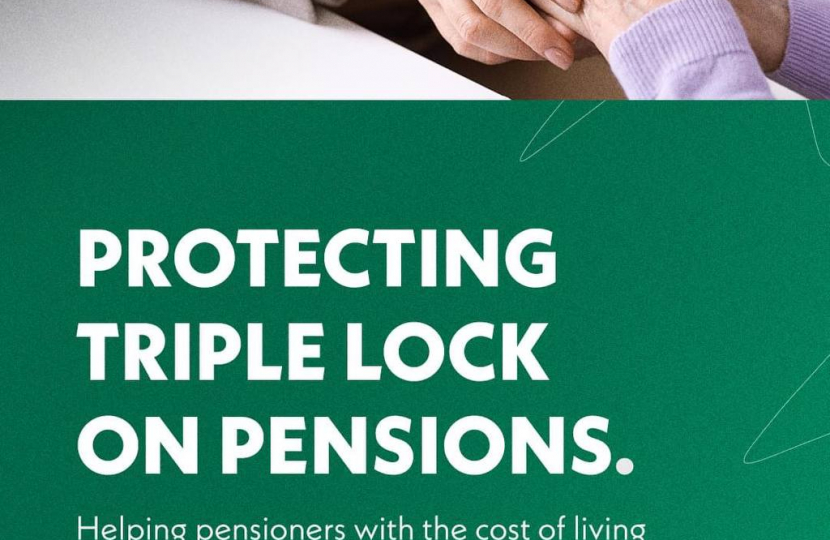 Local MP, Robert Halfon, has welcomed the measures announced by the Government to support pensioners in Harlow this winter. Following the Chancellor’s Autumn Statement last week, Mr Halfon has welcomed the decision to reinstate the Pension Triple Lock next year and award Winter Fuel Payments to over 11 million pensioners from today.

The Pension Triple Lock is the metric used to determine the annual increase to the state pension. Through the Triple Lock, pensions increase each year by either the average increase in wages, the rate of inflation or a flat rate of 2.5%, whichever is highest. This year, the Chancellor has confirmed that pensioners will receive an inflationary rise of 10.1% to their state pensions, with effect from April.

Pensions Minister, Laura Trott MP, told the Express that, “The 10.1 percent boost to State Pensions thanks to the Triple Lock will make a huge difference to the millions of pensioners who have worked hard all their lives and contributed so much to this country. It means that from next April the full New State Pension will rise to over £10,000 a year for the first time, and the Basic State Pension will be £3,050 higher than it was in 2010.”

In addition to the rise in state pension, with effect from today, over 11 million pensioners from Harlow and across the country will begin to receive Winter Fuel Payments. With the Payment boosted by £300 this year in response to higher-than-usual energy prices, pensioners can expect to receive up to £600 in cost of living support.

Furthermore, from next week, a further one million people from Harlow and across the country in receipt of tax credits can expect to receive their second cost of living payment of £324, which will land automatically in their bank accounts. These measures are part of the Government’s £49 billion cost of living support package this year.

Harlow MP, Robert Halfon said, “It is important that we support the most vulnerable people in our communities this Winter. I am delighted that the Government has introduced £49 billion worth of support to households in Harlow and across the country, including £400 energy bill payments to every household between now and March.

“I supported the introduction of the Pension Triple Lock by the Conservative Government in 2010 and voted in favour of it ever since. I am delighted that the Triple Lock means pensioners will receive a 10.1% increase to their pensions next year, which I know will go a long way to alleviate the concerns of pensioners in Harlow this Winter.”

MP for Harlow welcomes investment to protect the environment

Local MP, Robert Halfon, has responded to the announcement that fines against water companies will be reinvested to enhance our natural environment and to protect our waterways.