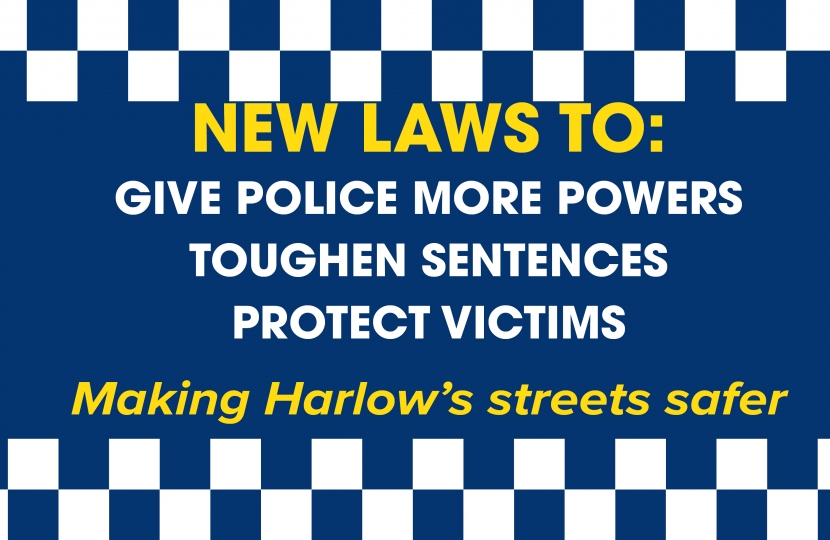 The Government are today introducing a new Bill in Parliament that will make Harlow's streets safer. The Police, Crime, Sentencing and Courts Bill will equip the police with the powers and tools they need to protect themselves and the public, while toughening sentencing for criminals.

Commenting on the Bill, Harlow's MP, Robert Halfon said: "I have worked hard in Parliament to ensure not only that we have more police officers on our streets, but that our police officers have the powers and protection they need to make our streets safer.

"This new Bill will mean that criminals receive a sentence that truly reflects the crimes they commit. It will also ensure we tackle a number of very important issues such as unauthorised encampments, assaulting emergency workers and protection for victims - all things I have campaigned hard on."

"This Bill delivers on that promise – equipping the police with the tools they need to stop violent criminals in their tracks, putting the thugs who assault officers behind bars for longer and strengthening the support officers and their families receive.

"The government has already recruited over 6,600 of the additional 20,000 police officers and every single one of them has my full support. This Bill enshrines my commitment to those brave officers who put themselves in danger to keep rest of us safe into law."

New protections and powers for the police include:

The Bill will toughen sentences by :